Baklava: A Sweet and Syrupy Dessert

Baklava, a syrupy, sweet pastry, is a traditional Greek dessert made with layers of phyllo dough, chopped nuts, (such as walnuts, almonds, or pistachios) and syrup or honey.

While this sweet and flaky dessert’s origins are divisive, it is widely found in many cuisines across the world, including Greek, Turkish, Armenian, Arabic, Persian, and Middle Eastern cultures.

In Greece, each region has different variations of Baklava, - some variations include different nuts (walnuts, almonds, pistachios), different numbers of sheets of phyllo dough, and different flavors to the syrup or filling (including cinnamon, cloves, cardamon, orange, Greek brandy or ouzo).

No matter the variation, this dessert has become widely beloved by many cultures around the world. The sweetness from the syrup, the crunchiness from the nuts, and the crispness from the phyllo layers all come together offering a melody of textures and flavors in every bite.

At Nerai, our Baklava also known as ‘Saragli’ or rolled Baklava, is made with a filling of roughly chopped walnuts, almonds, pistachios, sugar, cinnamon and cloves. It is then wrapped in phyllo and brushed with clarified butter, before reaching the oven where it is baked until golden brown. Once it is removed from the oven, it is drenched in a syrup made of water, sugar, lemon and clove.

Served with crushed pistachios, vanilla gelato and a tahini parfait, this dessert is the perfect end to any meal. 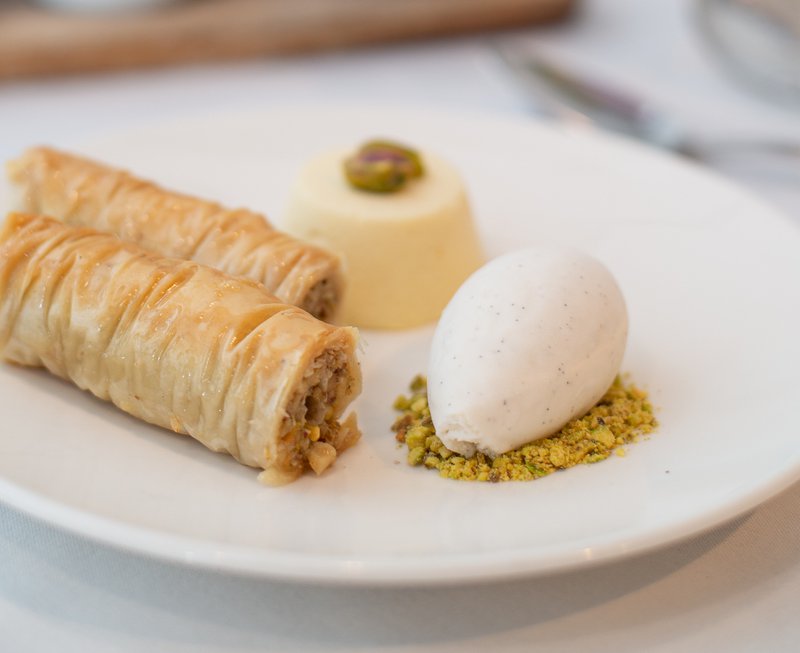