Delight In Our Greek Yogurt Trio

Greek yogurt, also known modernly in Greece as 'straggisto', is a yogurt that is strained out, removing much of the liquid whey, thus concentrating the protein and making it thicker. According to some historical texts, the first traces of yogurt have been found between 10000 and 5000 BC in the Neolithic period. It is noted that in 2000 BC humans understood that yogurt could be used to preserve milk. Similarly, ancient writings dating back to 100 BC noted that “certain nomadic tribes knew how to thicken the milk into a substance with an agreeable acidity”, thus yogurt along with other fermented milks are known to have been part of varying cultures for centuries.

While yogurt is believed to have been invented independently in different parts of the world, it is said to have been a well-known food in the Greek and Roman empire since around 800 BC. Interestingly, it is noted that ancient Greeks consumed oxygala, a distant ancestor of yogurt that was made out of sour milk and sweetened with honey.

Yogurt continued to appear in many ancient texts, over the centuries, including ancient Indian Ayurvedic scripts, the Bible and historic texts by Pliny, Herodotus, Homer, and Galen to name a few. Fast forward to the 20th century when researchers, notably Élie Metchnikoff, provided an explanation for the health benefits associated with yogurt consumption, thus leading to the beginning of the yogurt craze in the 1900’s.

Further, in 1919 in Barcelona, the first large-scale production of yogurt, Danone, (known as Dannon in the United States) was founded. Danone arrived in the United States in 1941, beginning in the Bronx, but it wasn’t until the 60’s and 70’s that yogurt became popular in the United States. Then in the 90’s, the Greek yogurt craze began to hit the market, as Fage, which had been around since the 1920’s, began exporting to North America. Companies like Chobani followed, when they began operating in the U.S in the early 2000’s, becoming the famed name brand of Greek yogurt in the United States. Greek yogurt had now taken over, as it boasted a tart flavor with a creamy smooth texture and an impressive number of health benefits.

Yogurt is a nutrient rich food that provides a high-quality source of protein, helping build and repair muscles and calcium, helping strengthen bones and teeth. When compared to traditional yogurt, Greek yogurt is higher in total protein, but lower in sugar. Similarly, like traditional yogurt, it contains probiotics which improve digestive function and the immune system and can even help fuel weight loss efforts by boosting metabolism and minimizing hunger pangs.

Further, in many cuisines around the world, while yogurt is usually known as the savory accompaniment served alongside the main dish, in many cuisines and cultures it is often seen as dessert or even breakfast dish often enjoyed with fresh fruits, honey and jams. Further, in Greece, yogurt lends itself to a variety of uses in the kitchen, especially for those with a sweet tooth. Which is exactly the case at Nerai. Our Greek yogurt is served in a trio with thyme honey & pecans, fresh mission figs, and sour cherry spoon sweet. It is the perfect dessert after a rich and savory meal. 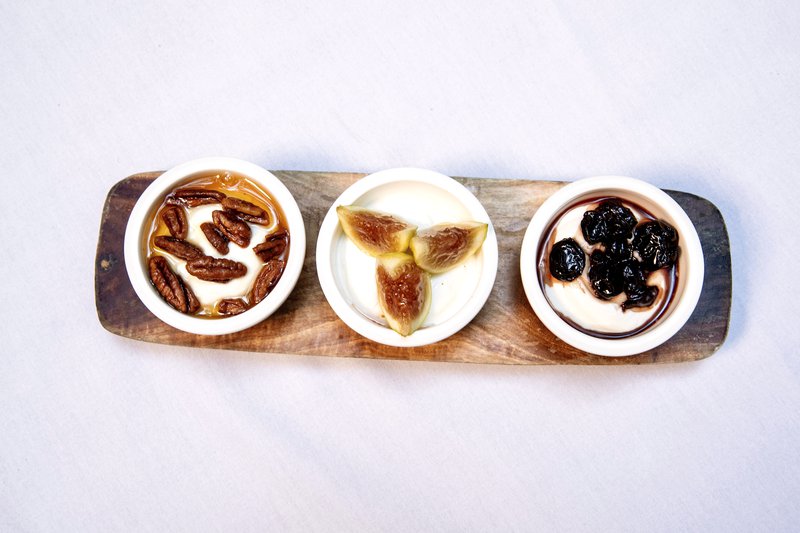