When you think of Mediterranean cuisine, one of the first dishes that comes to mind is Hummus.

The word hummus, (which has various spellings) comes from the Arabic word meaning “chickpea.” Hummus, a creamy dip or spread, is made from chickpeas (also known as garbanzo beans) that have been cooked and mashed, and is then blended with tahini (a paste made from sesame seeds), olive oil, lemon juice, garlic and salt.

The history behind hummus, is an on-going debate. Hummus is a part of Egyptian, Greek, Israeli, Turkish, Lebanese, Jordanian, Palestinian, and Syrian cuisine. Thus, many countries claim ownership over the dish. In folklore tales, hummus is described as one of the oldest known prepared foods.

While the origin of hummus is unclear, the one element that remains clear in the main ingredient. Chickpeas have been cultivated throughout the Middle East and India for thousands of years. The chickpea was one of the earliest crops in Mesopotamia, and consumed in ancient Palestine as well as ancient Rome. While countless regions around the world claim to be the place where hummus originated, the fact is that because hummus has been around for so long, the exact origin has been lost in antiquity. Based on historical information, hummus likely originated from ancient Egypt in the 13th century, but that doesn’t stop other regions from continuing to claim hummus as their own. Moreover, Ancient Greece and Egypt were trade partners for centuries which may explain why many foods in Greek and Arab cuisine are so similar. Many foods crossed over especially during the Ottaman Empire.

In 2008, the now legendary ‘Hummus Wars’ began, when Lebanon accused Israel of cashing in on what they believed should have been Lebanon’s legacy. Lebanon attempted to register the word “hummus” with the European Union however this ultimately was denied, as the EU determined it is the food of the entire region, not one specific area. As a result, Lebanon made a plate of hummus so large, weighing around 4,000 pounds, that it was recognized by the Guinness Book of World Records in 2009. This started a competition with Israel who retaliated with a hummus dish, weighing 8,000 pounds. The Lebanese counter-attacked with 23,042 pounds of hummus, the number of square kilometers in Lebanon, and have held the record since 2010.

Aside from it’s delicious flavors and versatility, hummus is widely known for its various nutritional benefits. Greek philosophers Socrates and Plato made references to the nutritional value of hummus thousands of years ago. The spread is high in iron, vitamin C, vitamin B6 and folate. It is a great source of protein, fiber, potassium and low in saturated fat. Hummus curbs cravings, lowers cholesterol, and may reduce your risk of certain cancers.

At Nerai, our hummus is a blend of mashed chickpeas, tahini, cumin, garlic, citric acid and is garnished with red onion in olive oil, paprika, and dehydrated chickpeas. This refreshing creamy spread is perfect for the summer months. Join us Monday, May 13th for International Hummus Day and indulge in our featured hummus to celebrate the occasion. 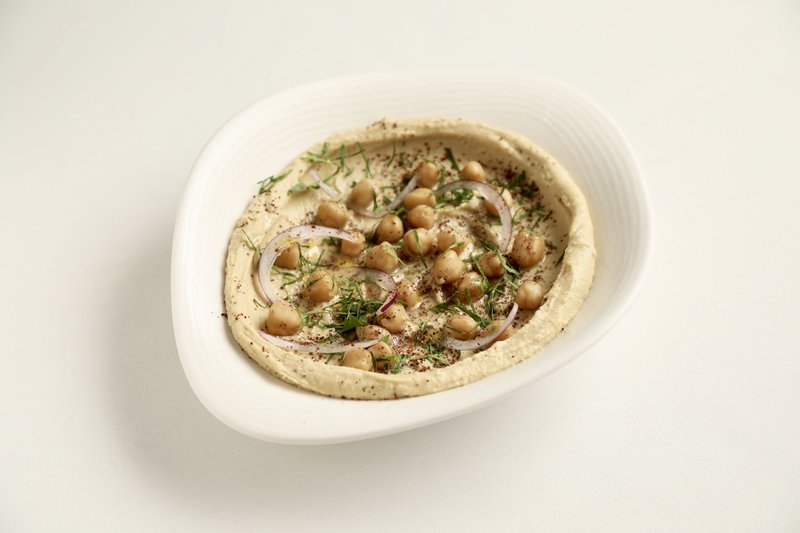